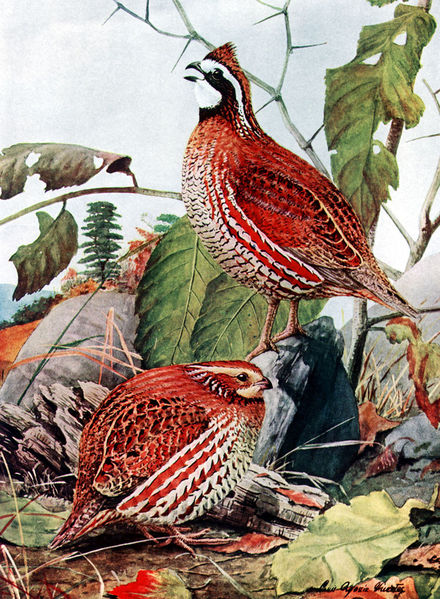 The earliest population decline of the Northern Bobwhite in the Midwest dates back to the mid 1800’s1. Population declines in the southern portion of the United States occurred later. These early declines were the result of several harsh winters after a series of relative mild winters2. However, quail populations recovered to healthy levels. The most recent, as well as most significant, decline in quail population occurred over nearly four and a half decades, beginning in 1966 and ending around 20103. The drastic decline in bobwhite population peaked at a loss of eighty-two percent of the Northern Bobwhites in North America4. The Northern Bobwhite is currently listed as a near-threatened species5.

The main cause of the drastic decline in Bobwhite population is habitat destruction. Northern Bobwhites prefer large, unbroken tracts of open grassland with hedgerows to provide cover from predators. This habitat is becoming less available due to modern farming techniques. The herbicides and pesticides used on fields destroy both the plants that produce food as well as cover for Bobwhites, and kill the insects upon which Bobwhites rely on during the breeding season. One of the best conservation efforts to maintain prime grassland habitat is prescribed burns6. In conducting a prescribed burn, an entire tract of grassland is burnt completely. The grass and weeds that grew in the area will quickly grow again, but the trees and bushes that were encroaching on the grassland will be removed permanently. Prescribed burns are recommended once every one to five years.

Despite the numerous conservation efforts, the population of Northern Bobwhites is still declining8. The decline has slowed with conservation efforts, but it will take much more work to reverse to current trend in Bobwhite population. However, we are on the right track to reversing the current decline. With luck and much more hard work, a the future will support a large, healthy population of Northern Bobwhite and their calls will once again be a common sound ringing out from a large open prairie.