Every birder has a favorite place to go bird watching. Either because of the number of birds that always are present at the location or because of the particular types of birds that are found at the location. One location that I like to travel to every once in a while is Liberty Park. Liberty Park is a small city park in the small southern Ohio town of Hillsboro. The park is good sized, and is prime birding habitat for all kinds of bird species, complete with a three mile loop trail. Below I will take you on a photographic journey through Liberty Park and highlight the best aspects of the park.

All photos taken by me, unless noted under the photo.

When you enter the park, there are large, open, grassy fields all around. I have found Northern Harriers, Dickcissels, and numerous Eastern Meadowlarks in the fields, as well as Barn Swallows. Below is a photo of one of the fields just before sunset, which is often used for soccer games:

If you follow the gravel road to it's end, it will lead to a trail entrance. The trail enters the woods, which it continues in for a good distance:

I love the diversity of native plant life in the woods. There is actually hardly any Japanese Honeysuckle at all, which is refreshing since most of the state is being overrun with it. In the woods you will find mainly Buckeye Trees, the state tree, or Boxelders, several varieties of maple, Sycamore, Black Walnut, and an occassional oak tree or two (I have never payed attention to what species of oak trees).

In the woods you can expect to find many common woodland birds, including many House Wrens, Northern Cardinals, Carolina Chickadees, Tufted Titmice, White-Breasted Nuthatches, Red Bellied Woodpeckers, Downy Woodpeckers, Pileated Woodpeckers, among others.

The trail through the woods also follows Clear Creek for a good distance, providing good mixed habitat where you can sometimes see waterfowl on the creek, or some species of sandpiper or plover. It was by the creek on my last visit to the park that I saw my lifer Scarlet Tanager. A vivid red male sat perched on a bare branch over hanging the creek in watch for insects. They are actually somewhat larger than I had imagined. They also appear much brighter in person than they do in photographs, whether they be in print or on a digital source: 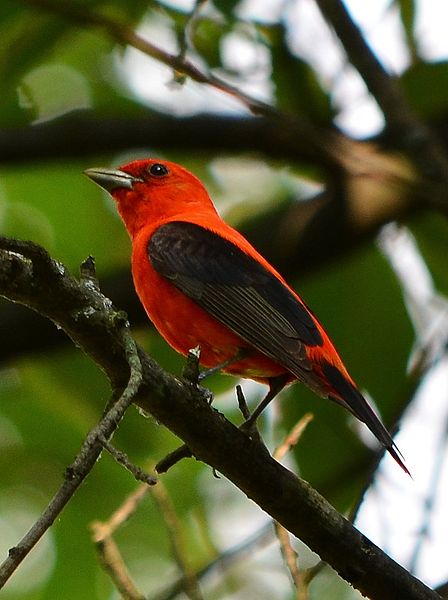 Below are several photos of Clear Creek:

As you can see, not only does the park offer good birding opportunities, but also quite scenic landscapes and an opportunity to get in your excercise whilst you bird.

Observe the quaint beauty of the Virgina Bluebell, which grows in patches in the woods along the trail on the banks above the creek:

When you exit the woods, you walk for a distance between the edge of the woods and a soybean field. A small tributary to Clear Creek runs through the woodland edge along the trail at this point, and rushes grow in plenty along this poriton of the trail. In the section I commonly see (or hear) mainly House Wrens and Carolina Chickadees, and also some Baltimore Orioles. It was along this portion of the path that I was able to photograph this Carolina Chickadee, which was perched in a Boxelder along the trail:

After a while along this pprtion of the trail you must hop over the tributary from stone to stone (there is no bridge). The tributary is perhaps five feet wide, but some large and conveniently placed stone make it easy to cross over. At this point the woods switch over to the opposite side of the trail (on your left), and on your right is a large soybean field and then a large grassy area followed by more fields. The trail then branches, one branch going through the woods on your left, the other going along the outside edge of the woods. The connect again at the top of a hill surrounded by grassy fields and soybean/corn fields.

At this point you have the option of cutting your walk short and going down a gravel drive back to the parking area, or continuing onward. If you continue, you follow the trail through the woods to the other side where the woods switch back to the right hand side of the trail again. On your left is soybean fields. This then connects to the main grassy area at the front of the park, loops around through the woods along the creek at the front of the park, and ends where you began at the side of the park near the woods at the gravel drive.

In the woods you will sometimes make an interesting find such as this intersting clump of fungi, species unknown to me:

It looks quite jungle-ish, doesn't it? If not in the photo, it did in person. The plants surrounding it were much brighter green in reality.

Last but not least you will cross over two bridges, one of which was built as an Eagle Scout project, which crosses the tributary to Clear Creek:

All in all, it's a good walk. Good natural beauty, good exercise, and of course, good birding! And for anyone who just loves being outdoors as much as I do, even if you don't see many birds it is just a great time being surrounded in God's beautiful creation. I encourage you to check it out- you will be glad that you did!